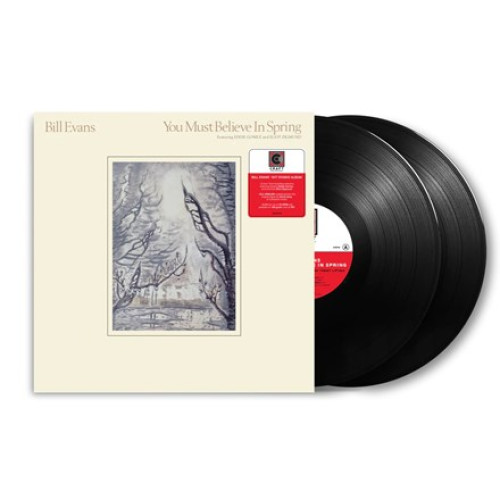 Bill Evans - You Must Believe in Spring

Craft Recordings is proud to reissue You Must Believe in Spring, the celebrated 70th studio album from the pioneering jazz pianist Bill Evans. Recorded in 1977 and released in 1981, just months after Evans' death, the album marks the artist's final studio recording with bassist Eddie Gomez and drummer Eliot Zigmund and includes stunning performances of "We Will Meet Again (for Harry)" and "B Minor Waltz (for Ellaine)." You Must Believe in Spring features all-analog mastering, cut at 45-RPM from the original tapes by Kevin Gray at Cohearent Audio. Pressed on 180-gram vinyl at RTI Record Technology, Inc. (RTI), the album is presented as a 2LP-set in a gatefold package, with new liner notes from music journalist, author and historian Marc Myers.

One of the most influential artists in the history of jazz, Bill Evans was known for his conversational interplay within his trios, his lyrical compositions and his matchless approach to the piano. His work with Gomez and Zigmund on You Must Believe in Spring offers a brilliant example of all three. At the time that they recorded the album, in August 1977, this particular iteration of the Bill Evans Trio had reached their apex, after three busy years of live performances and studio outings (including 1977's Crosscurrents and I Will Say Goodbye). Speaking to Marc Myers, Zigmund recalls, "We had reached a high level of conversational playing ... By Spring, we captured that ease of relating to each other."

Recorded over three days at Hollywood's famed Capitol Studios, the album paired Evans with the legendary producer Tommy LiPuma, whose extensive credits included Barbra Streisand, George Benson and Natalie Cole, among many others. Together, they selected an introspective collection of material which, notes Marc Myers, gave the album "a gentle, melancholy feel and a music-box tenderness." Among them were two deeply personal Evans originals: "B Minor Waltz (for Ellaine)," composed in the memory of the pianist's late common-law wife, Ellaine Shultz, and "We Will Meet Again (for Harry)," written for the artist's late brother. Two years later, Evans would revisit the latter composition, designating it as the title track of his final studio recording.

The remainder of the tracklist offered Evans the space to interpret a broad array of material – from lesser-known gems like "Gary's Theme," a 1968 composition by vibraphonist Gary McFarland, to such popular fare as Sergio Mihanovich's "Sometime Ago." On LiPuma's suggestion, Evans also delivered an inspired interpretation of "Theme From M*A*S*H (Suicide Is Painless)," the highly recognizable instrumental opener from the popular TV series. The title track, meanwhile, was a standard of the era, penned by the prolific French film composer Michel Legrand for 1967's The Young Girls of Rochefort.

In a 2016 interview with Myers, LiPuma reflected proudly on You Must Believe in Spring. "By pure chance, I caught that trio at the right time. They were locked in and it was perfection," recalled the late producer, who helmed the album alongside Evans' longtime manager, Helen Keane. "It all gets down to the quality of the story being told by the musicians. If the music is infectious enough, it grabs you and you can't get it out of your head. This album had all of that, at the highest possible level."

While You Must Believe in Spring was a triumphant outing for Evans, it also marked the end of an era. Just one month after the sessions wrapped, Gomez departed the trio, following an incredible 11-year run with the pianist. Zigmund, who first joined Evans and Gomez in 1974, left later that year to focus on his young family. But the story doesn't end there. During the summer of 1980, when Evans was performing a concert with his new (and final) trio, Gomez and Zigmund reunited with the artist.

"On a break, the three of us went to sit in Bill's Chevy Impala parked nearby. He wanted us to listen to a tape of the unreleased You Must Believe in Spring," shares Zigmund. "As we listened, I was transported back to the trio's conversational beauty. The music was special, and no one in the car said a word. Though Bill's face was expressionless while listening, we knew from his big parting smile that he was very happy with what he heard. That's the last time I saw Bill."

Evans passed away that September, five months before You Must Believe in Spring was released. While the pianist wasn't able to experience the album's warm reception, there was no question that he was proud of the recording. "For Evans, perfection was an allusive target and a career-long obsession," writes Myers. "You Must Believe in Spring is a studio album [that] Evans felt hit the mark."