* 1.The criterion of re-mastering is to faithfully capture the quality of the original master tapes. ESOTERIC's flag ship D/A converters, model D-01VU, Rubidium master clock generator model G-0Rb and ESOTERIC MEXCEL cables, were all used for this re-mastering session. This combination of highly advanced technology greatly contributed to capturingthe high quality sound of the original master tapes.
* 2.This vinyl was directly pressed from the first mold produced by the original Lacquer. The "Mother" copy extraction and its mold do not exist during the production process (two processes shorter than conventional vinyl production); allowing the groove edge to remain sharp on final vinyl. As a result press quantity is extremely limited!!
* 3.All material quality is carefully selected and strictly managed for reduced surface noise.
Ansermet, a great conductor who left his mark on the history of classical music with his exquisite and colorful performances
As the conductor for Diaghilev’s Ballets Russes, the master Swiss conductor Ernest Ansermet (November 11, 1883–February 20, 1969) premiered many important compositions of the early 20th century, such as Stravinsky’s Soldier’s Tale, Nightingale, and Pulcinella; Falla’s Three-Cornered Hat; Prokofiev’s Tale of the Buffoon; and Satie’s Parade. And above all, he is known for founding the Swiss Romande Orchestra in 1919 and, as its musical director, developing it into a global presence. In 1946, he entered an exclusive contract with the Decca label and made a vast amount of recordings covering French, Russian, 20th century, and German and Austrian music. Many of these recordings were highly evaluated in the LP age, complemented as they were by excellent recording technology. *
* FFRR. (“Full frequency range recording” in the era of monaural recordings; this was known as FFSS, or “full frequency stereo sound” in the age of stereo.) Decca developed this groundbreaking recording system during World War II at the request of the Navy to catch submarines. The system could play back at up to 12,000 Hertz&mdashgroundbreaking performance for that time, far exceeding the conventional narrow band.

The epitome of Spanish music by Ansermet
Among Ansermet’s many recordings, this album receives especial praise. It is a masterpiece of historic proportion, and was considered the representative version of the Three-Cornered Hat throughout the LP age. This album&mdashAnsermet’s third recording since his first monaural recording of 1952&mdashwas recorded in 1961, and was also known for the appointment of Teresa Berganza just after her debut. James Walker, the producer responsible for all of the stereo recordings of Ansermet, and Roy Wallace, the creator of the Decca stereo recording system, joined forces to realize this great recording. The interlude and dance from the opera, The Short Life, were also included in the original LP.
The tone and color of Spanish music caught in its entirety
“This is a performance to be known as ‘one of the greats.’ The composition, Three-Cornered Hat was premiered by Ansermet, and with its lively rhythms, subtle narratives, dynamic development, and vivid contrast and tone-colors, this version is a masterly performance that none other appears able to exceed. The performance illustrates an ethnic taste that is rich in wild beauty in a truly vivid and dynamic way, while highlighting the lyricism of Falla’s music in a sophisticated, uncompromising manner. The solo singing by the young Berganza is also worth listening to.”&mdashTakahiko Utasaki, Classic Meiban Taizen (Complete Classic Masterpieces): Orchestral Works, 1998.
In Japan, this version of the Three-Cornered Hat is known for its artwork using a Goya painting different from that of the original LP released in the UK. When it was re-released in the CD format, coupled with Love the Magician, this famous artwork was used again. This re-release in the 200 g vinyl uses the design of the original UK edition, showing a dancer standing in the plaza in the evening.
Great recording in the legendary Victoria Hall favored by Decca

Recordings by Ansermet and the Swiss Romande Orchestra were basically made at the Victoria Hall in Geneva, the home base of the Orchestra. Built by a British consul general who was posted in Geneva in the 19th century, this hall has superb acoustics and is optimal for recording. The first stereo recording by Decca was Rimsky-Korsakov’s symphony, Antar, by the Swiss Romande Orchestra conducted by Ansermet, recorded here on May 13, 1954. This legendary hall has been the setting for many great recordings ever since. 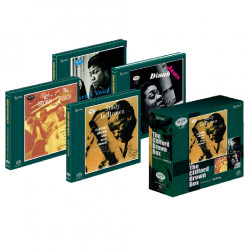