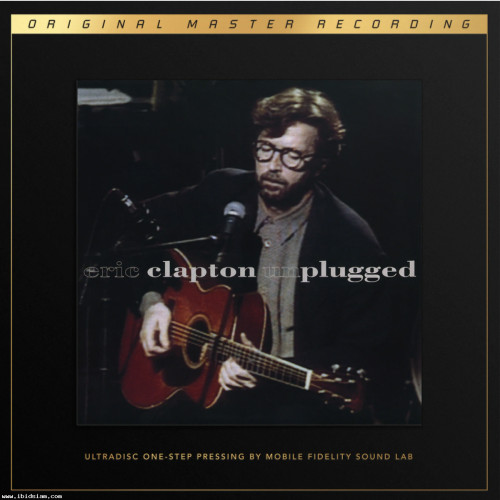 Eric Clapton's Unplugged is far more than an album. It remains a majestic picture of a moment in time; an unvarnished glimpse into the soul of one of music's most legendary artists; a visionary journey into the inspirations that helped shape Clapton's character; a re-exploration and re-evaluation of deep-seated roots; a continuation of critical blues heritage; a building block on which a subgenre sprouted; a launching pad for both a later-career resurgence and discovery. A perennial audiophile favorite and the best-selling concert release of all time, Unplugged now takes on an irresistible luster that veritably gives you a front-row seat at Bray Film Studios.

Strictly limited to 10,000 numbered copies, pressed on MoFi SuperVinyl at RTI, and mastered from the original master tapes, Mobile Fidelity's ultra-hi-fi UltraDisc One-Step 180g 45RPM 2LP collector's edition enhances the blockbuster work for today – and the ages to come. Surpassing the sonics of any prior version, it peels away any remaining limitations to provide a transparent, lively, ultra-nuanced presentation of a record that won six Grammy Awards – including prizes for Album of the Year, Best Male Rock Vocal Performance, and Best Rock Song. The expanse and depth of the soundstage, fullness of tones, natural snap and extension of the guitar strings, realistic rise and decay of individual notes, and roll of Clapton's vocals all attain demonstration-grade levels.

Housed in a deluxe box, the UD1S Unplugged pressing features special foil-stamped jackets and faithful-to-the-original graphics that illuminate the splendor of the recording and the reissue's premium quality. No expense has been spared. Aurally and visually, this UD1S reissue exists as a curatorial artifact meant to be preserved, touched, and examined. It is made for discerning listeners that prize sound quality and production, and who desire to fully immerse themselves in the art – and everything involved with the album, from the images to the finishes.

Truly, everything about Unplugged matters. Having sold more than 10 million copies in the U.S. and more than 26 million copies worldwide, the 1992 work resonates with listeners of all generations and speaks a universal language. Recorded for MTV before a very small audience on January 16, 1992, the 14-track set became the signpost for future acoustic-based endeavors that witnessed artists of all stripes re-examining their catalogs and, in many instances, as Clapton does here, placing familiar originals in fresh contexts and unveiling spirited versions of cover material. Needless to say, Clapton's session turned MTV's series into can't-miss programming for which the likes of Rod Stewart, Tony Bennett, Nirvana, Pearl Jam, and more would soon participate.

Kicking off his performance with a spirited instrumental to establish the mood, Clapton immediately wades into the style that originally caught his attention as a British teenager in the early 1960s: American blues. Backed by a superb band that includes guitarist Andy Fairweather Low, pianist Chuck Leavell, bassist Nathan East, and drummer Steve Ferrone, Slowhand delivers a rhythmic, toe-tapping rendition of Bo Diddley's "Before You Accuse Me" that announces he's come to reconnect with his muse. What follows over the course of nearly the next hour stirs the heart, shakes the soul, moves the mind, and invigorates the senses.

Of course, there's no talking about Unplugged without keying in on "Tears in Heaven," the striking ballad Clapton penned about the death of his four-year-old son. More emotional, direct, spare, and healing than the studio version released a year prior, it crackles with an intimacy, maturity, poignancy, honesty, sweetness, and integrity that inform the entire concert. Indeed, how Clapton frames other favorites here – transforming "Layla" into a relaxed, comfortable stroll and ruminating on the seasoned ripples flowing throughout "Old Love," for example – indicate both a creative rebirth and gleeful acceptance of the next phase of his career.

And that very direction (two of Clapton's next three albums would be all-blues projects) is what really makes Unplugged so indispensable. Equivalent in mastery if not in volume to the output that earned him his "God" nickname, interpretations of Jesse Fuller's "San Francisco Bay Blues" (complete with kazoo!), Big Bill Broonzy's "Hey Hey," Robert Johnson's "Walkin' Blues" and "Malted Milk," and Muddy Waters' "Rollin' & Tumblin'" showcase a learned professor in his element and all the wheels turning.

In every regard, Clapton's Unplugged session was appointment listening when it came out in August 1992. With the arrival of MoFi's UD1S pressing, that sensation is more urgent than before.

More About Mobile Fidelity UltraDisc One-Step and Why It Is Superior
Instead of utilizing the industry-standard three-step lacquer process, Mobile Fidelity Sound Lab's new UltraDisc One-Step (UD1S) uses only one step, bypassing two processes of generational loss. While three-step processing is designed for optimum yield and efficiency, UD1S is created for the ultimate in sound quality. Just as Mobile Fidelity pioneered the UHQR (Ultra High-Quality Record) with JVC in the 1980s, UD1S again represents another state-of-the-art advance in the record-manufacturing process. MFSL engineers begin with the original master tapes and meticulously cut a set of lacquers. These lacquers are used to create a very fragile, pristine UD1S stamper called a "convert." Delicate "converts" are then formed into the actual record stampers, producing a final product that literally and figuratively brings you closer to the music. By skipping the additional steps of pulling another positive and an additional negative, as done in the three-step process used in standard pressings, UD1S produces a final LP with the lowest noise floor possible today. The removal of the additional two steps of generational loss in the plating process reveals tremendous amounts of extra musical detail and dynamics, which are otherwise lost due to the standard copying process. The exclusive nature of these very limited pressings guarantees that every UD1S pressing serves as an immaculate replica of the lacquer sourced directly from the original master tape. Every conceivable aspect of vinyl production is optimized to produce the most perfect record album available today. 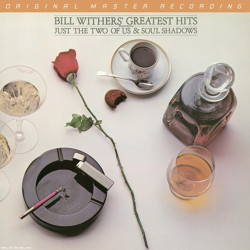