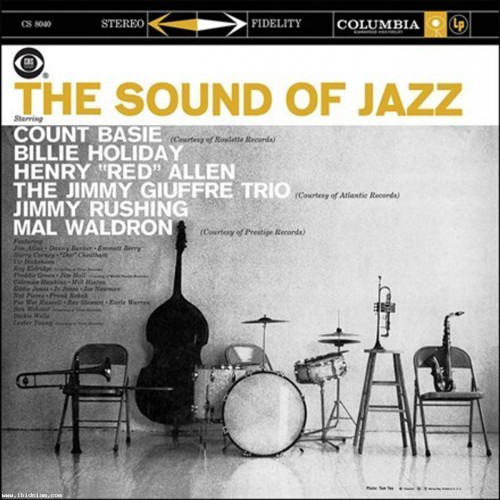 This is a magnificent-sounding recording of a historic TV event. For a rare and glorious one-hour nationwide broadcast, CBS brought together 32 towering heavyweight jazz musicians of the swing era for the jam session to end all jam sessions. The one-hour program aired on Sunday, December 8, 1957, live from CBS Studio 58, the Town Theater at 851 Ninth Avenue in New York City.

The Sound of Jazz brought together such jazz luminaries as Count Basie, Lester Young, Ben Webster, Billie Holiday, Jo Jones and Coleman Hawkins; the Chicago style players of the same era, like Henry "Red" Allen, Vic Dickenson, and Pee Wee Russell; and younger 'modernist' musicians such as Gerry Mulligan, Thelonious Monk, and Jimmy Giuffre. These players played separately with their compatriots, but also joined to combine various styles in one group, such as Red Allen's group and the group backing Billie Holiday on "Fine and Mellow." Columbia Records released this historic LP in 1958 which is actually a rehearsal that preceded the telecast (recorded on December 4 at Columbia's 30th Street studios), and is not its soundtrack. The recording doesn't include all of the performers on the TV show, but does include several who were not on the show.

Analogue Productions has cut this edition at 45 RPM! The dead-quiet 2LP-set, with the music spread over four sides of vinyl, reduces distortion and high frequency loss as the wider-spaced grooves let your stereo cartridge track more accurately. Exquisite sonic detail is captured on these 180-gram Quality Record Pressings discs, bringing out the exemplary mastering job by Ryan K. Smith. A gatefold old style tip-on jacket from Stoughton Printing with gorgeous photo rounds out the package!