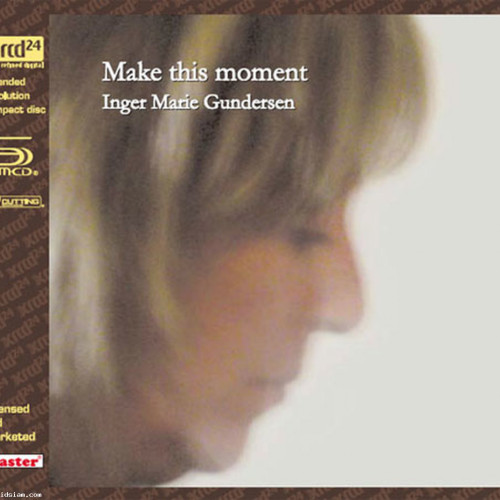 Inger Marie waited for many years before she ventured upon a solo career, but she has ample experience from many years activities in the music field. For twenty years she has been active as a vocalist in several bands, ranging from a youthful rock band to a six year period as lead singer of a jazz big band. She has also fronted her own jazz quintet My Favorite Strings, as well as collaborating with several excellent jazz musicians, among them Tom Lund, one of Norways finest Latin jazz-guitarists, founder of the renowned group Trio de Janeiro.

Having thus gathered a lot of experience and paid her dues, Inger Marie finally decided to enter the studio to record her debut solo CD Make This Moment. The time was right. Years of singing had matured her voice into an instrument of impressive sensitivity and perfection. Producer Lars Martin Myhre, himself a brilliant musician and a major artist in Norway, says that never has he got a bigger surprise than the one he got when Inger Marie started singing in the studio. She was displaying a voice so controlled, so beautiful and so personal at her first recording date, that the seasoned producer was left with his mouth open, stunned in admiration of the awareness and the warm and direct communication in her voice.

Make This Moment was released in Norway in October, 2004, and received rave reviews and instant recognition by jazz affectionados. After some months Inger Maries voice started touching hearts and impressing music lovers in places far from Norway. Japanese record buyers discovered her album, which started selling hundreds, then thousands in Japanese record stores. Record companies in Korea, The Philippines, Hong Kong, and soon also Japan, licensed the album and launched local releases. Now the album has been released in most of Asia, as well as in Europe, and has touched the hearts and souls of thousands of listeners.

"(Make This Moment by vocalist Inger Marie Gundersen)... is a nice reminder that vocal performances do not always have to be unbridled exhibitions of melismatic acrobatics. Indeed the hallmark of the album is an admirable restraint, and even austerity in the vocals and instrumentation... Make This Moment is an encouraging debut solo recording by a promising talent. Gundersen and her band treat their material with the utmost respect and delicacy. The album is a refreshingly tasteful affair." - allaboutjazz.com, April 4, 2005

SHM-XRCD24 (Super High Material XRCD24) is the ultimate XRCD24 that utilizes the materials and technologies that were developed for the SHM-CD to further enhance the audio-resolution. These discs are made with polycarbonate developed for the screen of the liquid crystal display. As it has a higher transparency, players can read the signal more faithfully. Also, it excels in fluidity, which enables you to cast a more accurate pit. What works wonders for a low resolution format such as CD should offer even greater sonic improvements in a real high resolution format such as XRCD24.

This extended resolution CD 24 (XRCD24) from JVC brings the listener higher fidelity and improved audio quality by enhancing the process of mastering and manufacturing compact discs. The xrcd24 is compatible with all CD players.

Features:
 SHM-XRCD24
 Made in Japan
 High Resolution Cutting
 Compatible with all CD Players